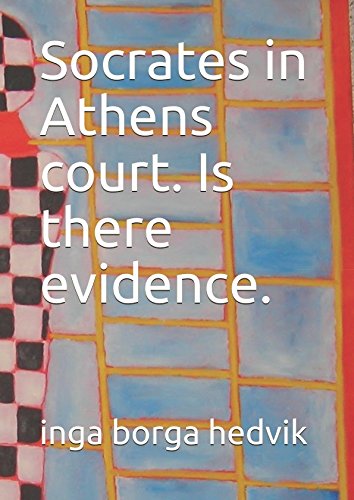 Socrates in Athens court. Is there evidence. Published through Amazon.


(...)defends and acquits Socrates and in this matter the philosophy because if Socrates was in court so all philosophy was in court and that is clear that is falsification of philosophy because rationally we know how important philosophy was and is. Though this is a philosophy and philosophical court of philosophical matters and Socrates is was acquit by his supporters and his scholars beside by the same philosophy and by his immense influence that last until our times and not only for science though though for the rational mind as the same. And without thinking substance mankind will not last or exist. That is way we have study and learn from prudence from erudition and intellectuals.

By all means the most rational answer is that it is was philosophical court of philosophical matters the same as we can subordinate this very logically and rationally. Because without logic philosophy or philosopher would not have the future. Again logic is another and different field of science. Through the prism of theory of ideas the books finds its existence and why it is so because philosophy was unconsciously produced for thinkable substance of thinking and this continuously enters into science circles for to produce better scheme of the future. Though without knowing and understanding existence we will not be able to understand the being and the world will stand still as backward into civilization formation from the chaos as how the world has formed from the chaos to civilisation. The importance is here now that we have philosophy that makes as capture the mind of thinking and rationalise the existence. Because Greece were and is proud of


their science and the ancient scientist impact into the western world as the same we have to remember that exactly Greece was the leading country in ancient times and that is rather of importance. The same ancient Greece is proud not only with their philosophers though very influential architecture and arts until our times. As the same like declare that famous philosopher was in court and punished for his increatable work for others is an absurd because there were many speakers and especially in the agora. That is why and by all means philosopher who has a phenomenon can not be in the court because there were definitely who to control though would it be possible to sentence the tutor because he was the one who taught and without schools Greece would not make into the first leading country of the world at the ancient times. (...) Socrates in Athens court. Is there evidence.(Inga borga Hedvik)

p.s. know that God forbids to kill....so think and be wise....rationality only helps and helps to survive....even you do not believe in God at any matter you can not kill....I do believe in God and I pray that you all believe too....killings and suicides are forbidden....so help the one who really needs help....


inga borga hedvik is a writer.
Inga Borga Hedvik’s philosophical work was translated by the writer herself from Lithuanian language with the additional paragraph written in English.  In this work “Socrates in Athens court. Is there evidence.” Inga is explaining the book Apology written by Plato. And the main concept of the book is the question does everyone has the thinkable substance of mind thinking.


p.s. you may publish your books for free through https://kdp.amazon.com or even all your music, art or artwork online for free...
Powered by